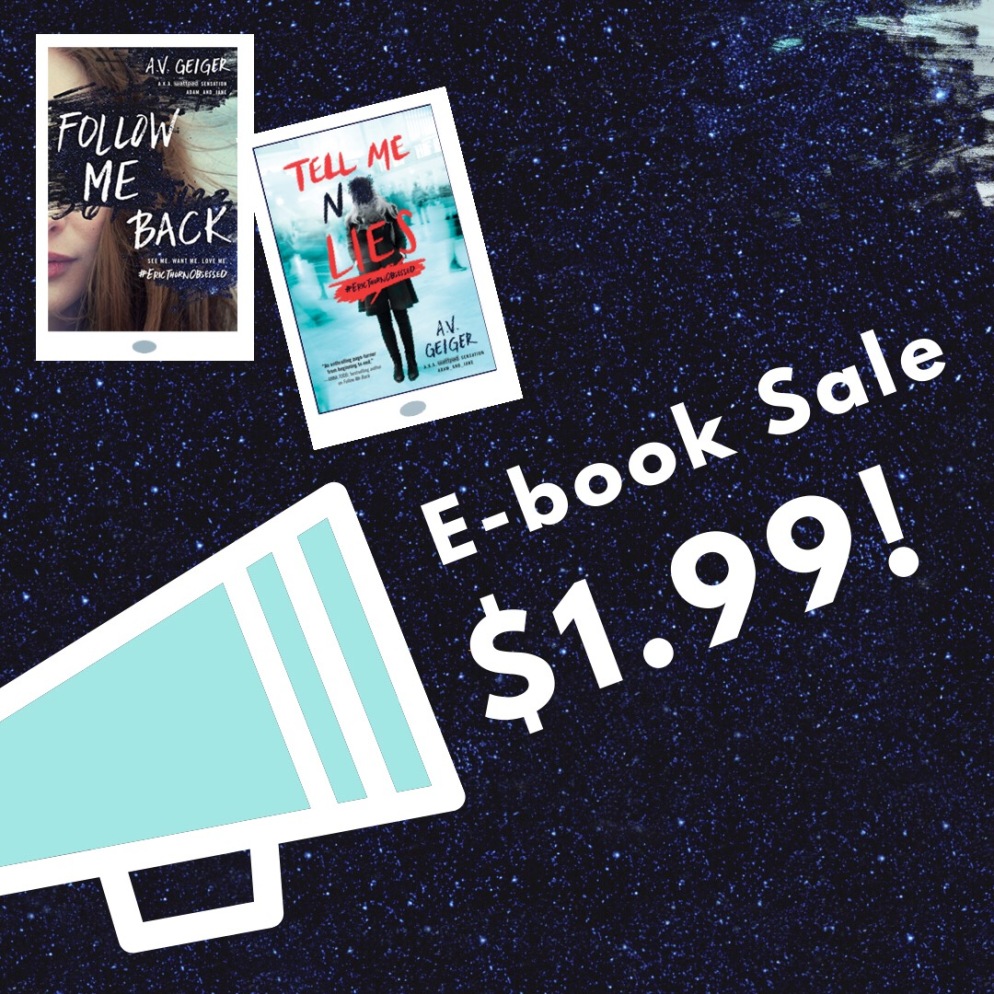 Get the Follow Me Back and Tell Me No Lies eBooks for $1.99!

Download your $1.99 eBooks wherever you normally shop for books:

Tessa Hart’s world feels very small. Confined to her bedroom with agoraphobia, her one escape is the online fandom for pop sensation Eric Thorn. When he tweets to his fans, it’s like he’s speaking directly to her…

Eric Thorn is frightened by his obsessive fans. They take their devotion way too far. It doesn’t help that his PR team keeps posting to encourage their fantasies.

When a fellow pop star is murdered at the hands of a fan, Eric knows he has to do something to shatter his online image fast―like take down one of his top Twitter followers. But Eric’s plan to troll @TessaHeartsEric unexpectedly evolves into an online relationship deeper than either could have imagined. And when the two arrange to meet IRL, what should have made for the world’s best episode of Catfish takes a deadly turn…

Told through tweets, direct messages, and police transcripts, this thriller for the online generation will keep you guessing right up to the shocking end.

“Debut author Geiger’s social-media-saturated thriller (which fittingly got its start on Wattpad) should transfix teens for whom online relationships (romantic and otherwise) are integral parts of daily life, and catfishing and hacking are genuine fears. Tweets, direct messages, and police interrogation transcripts are incorporated throughout, throwing the reliability of both narrators into question and hinting at the sinister thread underlying this boy-meets-girl story. ”

“Pieces are revealed one at a time until they all come together at the end-right before everything falls apart before a final, dark twist. A page-turner for young adults invested in social media, fandoms, and mysteries.”

“This is a unique concept that will be well-received by older teens. The ending seems disjointed until the reader realizes it is so open-ended and mysterious that the reader is left wanting more. It is well written and covers some real dangers surrounding social media and predators.”

“Told though alternating points of view, tweets, and police reports, this novel is perfect for fans of Sara Shepard, April Henry, or Kimberly Derting. In her debut novel, Geiger creates a rich horror story which is all the more intriguing because of its conceivable possibilities. Using fan culture and social media communications to the best effect, she makes the setting and plot convincingly real.”